Los Angeles slip and fall accident lawyer David Azizi has defended the rights of many Los Angeles area residents who have suffered slip and fall injuries on public property. David has sought to obtain the compensation his clients need to pay their medical bills, recover lost wages or other damages the incident caused.

Call David’s office 24/7, seven days a week to schedule a free, no-obligation case review. David will go over your case, answer your questions and discuss your options going forward. Just call (800) 991-5292 or use our contact us page. David wins 98 percent of his cases. Let’s get started on yours.

Have you tripped and fallen on a public sidewalk, slipped inside the post office or fallen after tripping at the county museum? All of the scenarios have one thing in common: they happened on government property. If the accident and subsequent injuries happened due to negligence, you might wonder if you have the right to be compensated for the damages associated with the accident.

As with commercial and residential trip and fall accidents due to negligence, those that happen on public property are subject to premises liability law. This law governs what happens if you fall at Walmart, at a hotel because of negligence of an ice machince, on a public stairway, or even a local grocery store. However, if the accident happened because a government employee or entity failed to keep the property safe, you can file a claim against the city, county or federal government.

There are differences in filing a claim against a government entity, however, and knowing what to do and the time frame in which you must act can affect whether you succeed in collecting damages or not.

What to Do After a Slip, Trip and Fall on Government Property

Immediately after falling, there are things you should do. They are:

If You Are Injured You Must Have Questions

Call or live chat 24 hours a day to see how we can help.

Email UsTrust Us To Help

How to File a Government Personal Injury Claim

In order to file a lawsuit against a government entity or recover compensation, you must meet the requirements of the California Tort Claims Act*. Following the lead of The Federal Tort Claims Act (FTCA) of 1946, which allowed citizens injured on federal property or hurt by a federal government employee to file a lawsuit to recover damages, California permits those injured on the city, county or state level to file claims or lawsuits against the government. One requirement is to file a written notice of claim against the government entity.

Notice of Claim in Slip, Trip and Fall Injuries in California

The notice of injury claim is used to advise the government entity that you intend to file a claim for personal injury, death or damage. The government agency has 45 days to respond. If the agency allows the claim, you will be compensated for your injury. If no response, the claim is deemed denied.

If the claim is denied within the 45-day period, you can file a lawsuit. The lawsuit must be filed within six (6) months from the date the denial was mailed or personally given to you. If no rejection letter is received, you have two years to file a claim from the date the incident happened. However, it is prudent to assume that you have six months to file.

The federal government uses Standard Form – 95 (SF-95) for this purpose, while Los Angeles County** and the City of Los Angeles*** has its own claim of notice form against public entities and government employees. The Law Offices of David Azizi can provide you with their own form.

The following information is included on the form:

Time Limit for Filing a Notice of Claim

Without filing a claim notice, a lawsuit in the matter will not be allowed to proceed if you are denied. Your claim will not be approved either.

A claim that is filed after the six-month period and is accompanied by an application for late filing may be accepted as filed. Under Gov’t Code Section 911.4(a), you need to attach a claim and explain why it is being filed beyond the six-month limit. There are only four reasons that can be used. They are:

Where Do I Send the Notice of Claim?

It is imperative that you send the notice to the proper government agency. Sending it to the wrong agency can result in your claim being barred. It is a good idea to call the city or county clerk’s office to find out where to send it. If your claim is against the state of California, you can call the Government Claims Program† for more information.

It is a good idea to send a letter to the person with whom you spoke, confirming the address and other instructions you were given and retaining a copy for yourself. Since it is important to prove the form was received within the required time limit, you can either send it return receipt requested or include a copy of the form and a self-addressed, stamped envelope for the clerk to send along with a date of receipt stamp.

Proving liability is a slip, trip and fall case in a government building follows the same rule of law as other personal injury cases. You must prove the following:

The hazards that can cause a trip, slip and fall injury vary widely. They include but are not limited to the following:

If you are unsure whether your accident happened on the premises belonging to a business or a government entity such as the City of Los Angeles , there are ways to find out. For example, let’s say you tripped on a damaged sidewalk in front of a convenience store. It may be unclear whether the convenience store was responsible for the sidewalk or if the city was. It may be necessary to go to the tax collector’s office‡ to determine who actually owns it.

One of the most frequent questions an attorney is asked is how much is my case worth. That differs from one case to another. The Law Offices of David Azizi provide a slip and fall settlement calculator for just that reason.

David will explain that resolving a claim too quickly may result in you not being compensated for all your injuries. Sometimes injuries evolve and it is impossible to know how injured you are in the beginning. If the case is settled too early, additional expenses for these late-developing issues will not be covered.

There are common expenses shared by government slip and fall and trip and fall cases:

Common Injuries in a Slip and Fall Accidents on Government Property 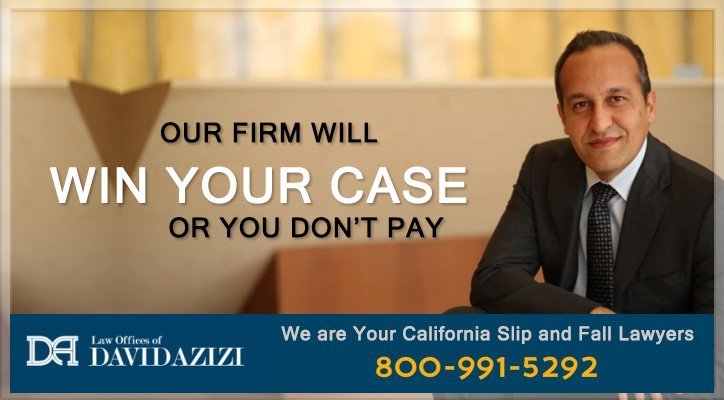 David Azizi has been practicing personal injury law in Los Angeles and the surrounding area for 22 years. He gives his clients not just the empathy and compassion they need, but the skill and experience he has honed during this time. In the end, David wins 98 percent of his cases because of commitment to clients, tenacity in accomplishing just and adequate resolution of their cases and the knowledge of the law he possesses.

Several outstanding organizations have acknowledged David’s acumen, including Super Lawyers who call David a top personal injury lawyer in Beverly Hills and Expertise.com who call him one of the top twenty lawyers in Los Angeles.

Call David anytime, any day of the week at (800) 991-5292. The Law Offices of David Azizi know accidents don’t happen during regular business hours, and we are here when you need us. David even gives clients his cell phone number because he recognizes they have many questions or just need to talk to him.

Take the stress out of dealing with government regulations, and get the compensation you need to pay the bills often associated with a government slip, trip and fall accident. David will do it for you, and if it is necessary to take the matter to court, David will be there. Call us today and set up your free, no obligation consult now.