If you or someone you know has suffered an amputation due to another party’s negligence, you should call an attorney with expertise in such injuries. Since amputations can result in large medical bills, lost wages, and a significant loss in quality of life, contact attorney David Azizi at 800-991-5292 for help as soon as possible.

The Law Offices of David Azizi offers free consultations and can be reached 24/7. David will discuss your situation with you, drawing from his experience with amputation cases that goes back to 1998. After reviewing your case, he will be able to tell you what compensation you may be entitled to receive.

If your amputation injury occurred at work, we still strongly encourage you to talk about it with David. Workers’ compensation, also called “workers’ comp,” is often the only recourse an employee has in such an accident. But if a third party was negligent and caused your suffering, then there may be grounds for a personal injury lawsuit as well. 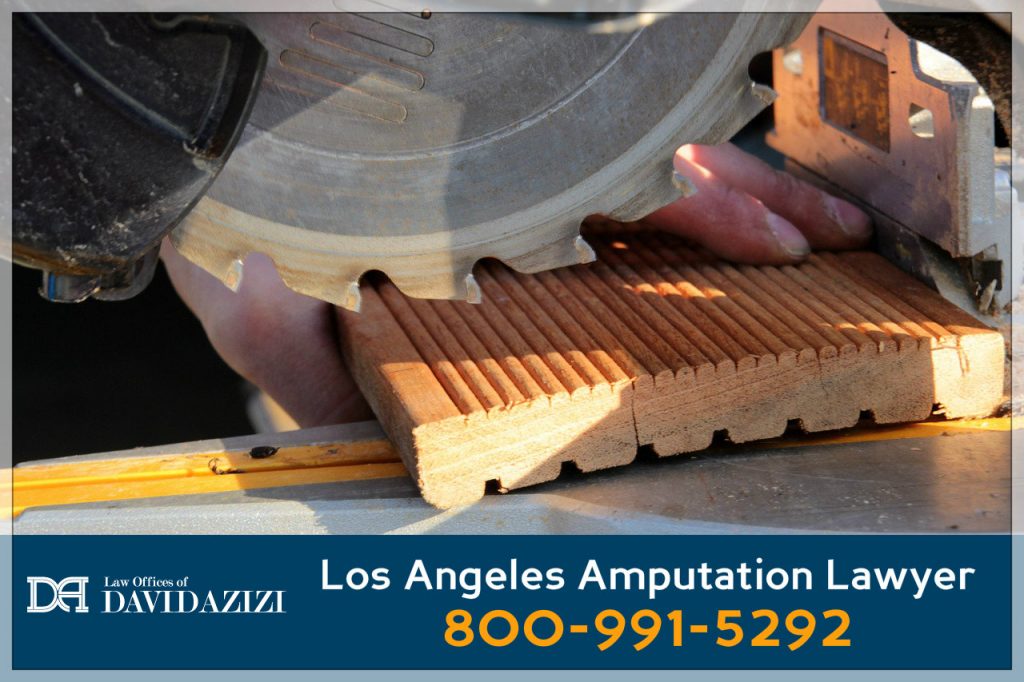 For instance, if a construction worker is using a power saw and he accidentally cuts off one of his fingers, workers’ comp would be his only recourse. But if the power saw was defective to begin with, you may be able to bring a lawsuit against the saw’s manufacturer. In this example, your suit would claim that the maker was negligent and produced a faulty piece of equipment.

Whether their dismemberment accidents occurred on the job or not, Los Angeles residents have called David because he wins settlements involving all the common causes and types of amputation at a 98-percent rate. They also go to him because he truly sympathizes with the lifelong consequences of these kinds of injury.

An Important Conversation About Amputation Injuries and Lawsuits

Los Angeles amputation attorney David Azizi discusses the important elements involved in amputation lawsuits and how the process of working with a lawyer after an amputation injury work. Listen to the audio episode below. Click here for full transcription of episode.

David will aggressively pursue monetary compensation for injuries from these and many other causes of amputation. Call our law offices to discuss whether your situation qualifies as a negligence case.

Most people don’t know that car crashes cause the vast majority of amputations. Honored with a “Superb” rating by the legal resources company Avvo, David understands how car accidents often result in dismemberment injuries to drivers, passengers and pedestrians.

A motorcycle accident often results in a foot amputation. Legs and feet often get pinned either between the rider’s bike and another vehicle, or between the bike and the pavement. Again, the crushing forces can cause an immediate amputation or necessitate a medical removal of the affected body part.

Motor vehicle accidents often cause pedestrians severe injuries that result in the loss of limbs or digits. In 2013, according to the Centers for Disease Control and Prevention, over 150,000 injured pedestrians went to U.S. emergency rooms for treatment following non-fatal accidents. Many of those, sadly, lost a part of their bodies.

David has handled numerous such cases, many of which involved Metropolitan Transit Authority (MTA or Metro) buses, which are ever-present throughout Los Angeles. In one such case, David’s client stated that although he had a “walk” signal at an intersection, an MTA bus tried to beat the light. The bus hit him, resulting in the loss of his leg.

The bus driver claimed under oath that he did not attempt to beat the light. Further, an ambulance driver testified as a witness that David’s client ran into the intersection to beat the “don’t walk” signal. But after further investigation, David demonstrated that the facts of the case contradicted the two drivers’ testimonies. In the end, he won his client a fair financial settlement that included coverage for future medical expenses, the costs of needed prostheses and other adaptive equipment, and the wages lost while he was unable to work.

Every situation is unique and may not result in a large settlement. So please be sure to contact our law offices to discuss the particulars of your case.

All extremities and limbs can suffer amputation. Such losses may be complete or partial, and they include:

A dismembered finger not only makes daily functioning much more difficult, but it can also result in a permanent inability to perform one’s job. David will assess your potential lost wages over the years to come, often factoring in a likely increase in salary. He will then aggressively seek to recover the maximum amount of monetary compensation to take care of your lost wages, medical bills and your family’s future. Again, contact David immediately so he can begin a review of your case, collecting needed evidence before it disappears.

In one of David’s recent cases, a young girl was getting off a Metro bus, holding the handrail along the rear exit steps, when the automatic electronic doors closed on her hand. She lost her thumb as a result. The driver was found to be negligent because he failed to ensure all the passengers had fully exited the bus before the doors closed. Sadly, this girl will have to deal with the lifelong consequences of the driver’s error.

Here, David talks about a different case in which a farm worker lost most of his fingers in a defective machinery accident. Notice especially David’s description of what happens when a person loses a thumb:

An amputated toe is another common type of dismemberment. People who experience this injury, like those who lose a finger, will also have lifelong difficulty performing tasks we take for granted. The loss of a pinky toe, for example, may not itself prevent a victim from walking or running in the future. But if doctors decide to perform a ray amputation (one that includes the connected metatarsal), walking and running will be extremely difficult due to the resulting loss of balance. And if the victim’s work depends on such physical movement, a job could be lost.

David recently took a case that involved a child whose foot got stuck in a department store escalator. Because these machines often run for twelve or more hours a day, an intense amount of heat builds up on the sides of the escalator. For this boy, the heat melted the rubber sole of his shoe, and his foot was pulled into the small gap between the step and the sidewall. Here’s a diagram: 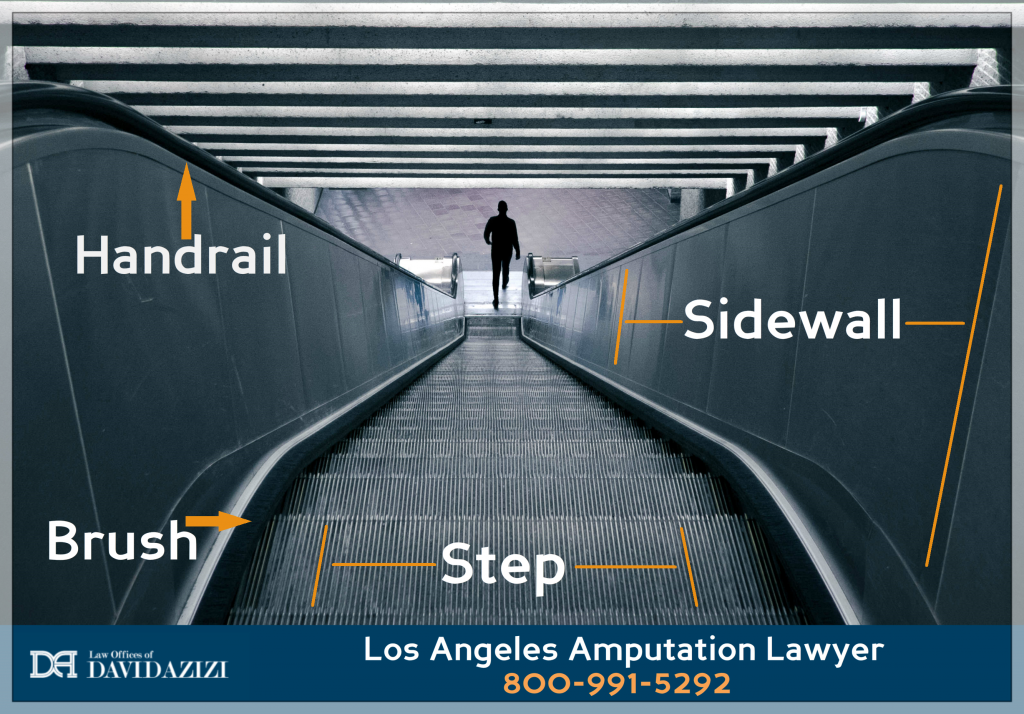 Tragically, the boy suffered an amputated toe. David sued the store and the escalator manufacturer on the child’s behalf, and he won a very helpful settlement for the boy that covered medical expenses, prostheses and the costs of counseling for the emotional trauma suffered. The settlement also required the store and manufacturer to make changes afterward to prevent a repeat of this occurrence.

Again, every client’s circumstances differ in some way, so call us to get a rapid and honest evaluation of how much financial compensation you may be entitled to receive. For more on toe amputation compensation, visit our special toe amputation page.

Hand amputees face a lifetime of challenges that are similar to those of finger amputees, multiplied many times over. As advanced as prostheses and even robotics have become, they still do not function as effectively as a human hand. If you or someone you care about has experienced this highly traumatic injury, be assured that David and his team stand ready to assist you.

Amputation injuries render many daily tasks impossible and cause much physical, emotional and financial stress. If you have experienced an amputation, David and his team truly feel for you and will fight for you. You are so much more than “just a client”! And if you are calling us on behalf of a child who has suffered an amputation, please know that David feels it in a profound way; he and his wife themselves have three young children and can sympathize deeply with another parent’s heartache. David believes that clients need to know everything about their case. He wants them to understand upfront how much compensation they can reasonably expect, given their unique circumstances. He will alert them when he senses that opposing parties plan to bring up unpleasant matters. He also won’t charge clients until after he has won a settlement or verdict; in the unlikely event he does not succeed, there will be no fee at all. David also commits himself to being available for his clients’ questions. He believes that when a dismemberment victim hires his firm, he or she is hiring him in particular, so he gives each client his cell phone number. It’s another way he demonstrates that he appreciates what his clients are going through.

A very important point to reiterate: In California, the workers’ comp money that goes to an injured employee is typically his or her only recourse if injured on the job. It is supposed to cover medical bills and work disability payments. However, if a defective product caused the accident, an employee could sue the manufacturer. Sorting through workers’ compensation for finger, toe and other limb amputation cases can be tricky. But David can help you determine the best course of action to take. Please don’t delay in contacting our law offices. Since 1998, David Azizi has represented Los Angeles-area victims of amputation injuries. They have chosen him because he genuinely cares, and because of his great success with all common types and causes of amputations. We welcome you to call now at 800-991-5292 for your free amputation injury consultation. You may contact us any time of day and any day of the week. We look forward to connecting with you!
Get FREE Phone Consultation For Your Case
Representatives are available 24 hours a day, 7 days a week. Call 1-800-991-5292 Now