Driving near an oversized load can be a nerve-wracking experience for many motorists. This is because they realize that an accident with one is potentially fatal. Oversized loads are used to transport any type of item that is larger or heavier than those normally carried by truck. They may include industrial equipment, pre-manufactured homes, construction machinery and in one case, the Space Shuttle Endeavor. California heavily regulates oversized loads and even permits superloads, all of which must meet the California Department of Transportation regulations. In the following, we will examine oversized loads and dangers caused by them.

If you need immediate assistance after a collision, begin with a free review of your case provided by a proven Los Angeles truck accident law firm. Call the Law Offices of David Azizi 24/7 at 800-991-5292. 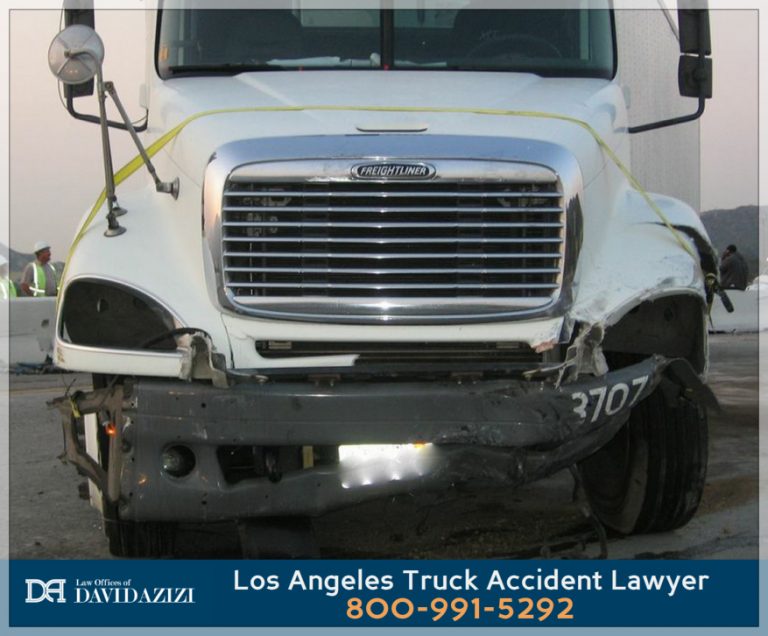 As you’ll see, oversized loads are highly regulated in the state of California. This is due in part to the many dangers associated with vehicles hauling these loads on heavily trafficked highways. A truck carrying an oversized load can weigh up to 180,000 lbs. With that weight, the harm that could befall the occupants of passenger vehicles in a collision is difficult to imagine. Let’s look at what oversized loads are, how they are regulated and the types of truck accidents that can happen.

It is important to have an experienced truck accident lawyer by your side after an accident with an oversized load hauling truck occurs. The trucking company hauling the load is obligated to hire drivers that are trained to control such trucks with their enormous weight and size. Your attorney needs to be able to sift through permits and other documents to make sure the trucking company was abiding by all the rules. That sort of knowledge makes the difference between winning and losing.

David Azizi has the experience you need. He has been practicing personal injury law for over two decades and has an excellent track record when it comes to truck accidents. Overall, David wins 98 percent of his cases. David also has compassion for his clients and works hard to make the aftermath of an accident financially easier on them by getting the compensation they need.

What Is an Oversized Load?

Also called an overweight load, a larger than normal load is one that exceeds the legally accepted load width, height and weight. If the cargo exceeds the normally designated limits, the trucking company must apply for a special permit. The permits are provided by the states. The federal government does not issue permits, so a hauler with an oversized load passing through several states must have a permit from each.

The types of cargo hauled in an oversized load can include: combines, tractors, cranes, bulldozers, wind blades, steel beams and prefabricated houses. This is cargo that cannot be broken down into smaller parts without damaging it. This means, in California permit lingo, that the load is non-divisible. According to the California Department of Transportation, to qualify as non-divisible, a load must be such that by dividing it, it would make the vehicle being transported less functional or destroy the cargo’s value.

There are regulations in California that must be in place if an oversized load is going to travel within or through the state. Permits are required for oversized loads if they exceed the legal limit for weight, height, width and length. Let’s compare the legal limits and the maximum limits for these dimensions:

Times That Oversized Loads Can Travel in California

Travel times are restricted in certain areas in California. Los Angeles, San Diego, Sacramento and San Francisco do not permit oversized load travel between 6:00 a.m and 9:00 a.m. and 3:00 p.m. and 6:00 p.m. No travel is permitted on holidays. The exact permitted travel time will be found on the permit issued by the California DOT.

Pilot or escort cars are required with some oversized loads. It depends on the length, width, height and overhang. For instance, if the oversized load plus the vehicle is more than 100 feet in length, it must be accompanied by one escort car in the front and one in the rear. If the width is more than 12 feet, a pilot car will be needed in the front on roads that are two lanes and in the rear on four lane roads. With loads 15 feet wide, both a front and rear pilot car is needed. High-pole pilot cars are needed if the load is 17 feet high. Pilot cars are usually not required with 15 feet of overhang, but this depends on the route. Starting at 20 feet of overhang, a pilot car is needed.

All trucks hauling oversized loads must display banners for the type of load they are carrying. For example, wide or long load or excessive overhang. In addition, flashing lights or strobe lights must be on the top of the truck.

Why Do Oversized Loads Cause Accidents?

The increased weight and size of an oversized load makes it even harder for a trucker to drive safely on busy roadways. Some of the most common issues are:

Some truck accidents are more common when the load is oversized. These include:

Liability With an Oversized Load

The liability of a trucker or a trucking company hauling oversized loads is in addition to the responsibility already in existence. For instance, truckers and their employers must maintain their vehicles to make sure accidents don’t happen. Lack of maintenance for brakes and tires, for example, puts the driver at a greater disadvantage when driving a truck weighing more than 80,000 pounds.

Making sure that all regulations are scrupulously followed is another concern. Traveling during forbidden time periods or failing to have an escort vehicle can predispose to a crash. It also shows a lack of care for fellow motorists and can be used against the trucking company during a lawsuit.

If you have been in an accident with a truck carrying an oversized load or if a member of your family has died, you may be facing medical debt and other financial loss. Added to the pain and the grief you are dealing with, you have little time to try and recover damages. This is the time to call personal injury attorney David Azizi at 800-991-5292. Besides his legal prowess, David has vast experience with truck accidents and uses both to help his clients.

David will investigate the accident, using experts in oversized load truck accident reconstruction. He will use the truck’s logs to make sure that every safety precaution was followed, and check to make sure all California regulations were complied with. At the end of the day, David will have a clear picture of what caused the accident and who was to blame. Winning is rarely about luck. It is the culmination of hard work, experience and knowledge. David has all three and will pursue your case until you have won.