Hit From Behind Lawyer in Los Angeles 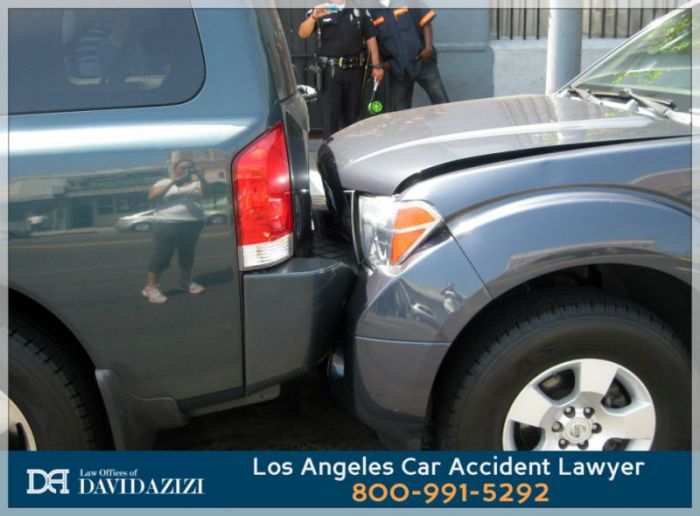 Hit from behind or rear end collisions are the most common type of car accidents today.

Out of six million vehicular accidents annually, more than 40 percent are rear-end collisions. This translates into 2.5 million accidents each year or one every eight seconds. Despite attempts to prevent such accidents, they continue to occur.

Because of the risk associated with this type of accident, learning more about the reasons it happens, the injuries that are inflicted and how liability is determined is important.

If you need immediate help after a rear-end car accident, call the Law Offices of David right away from a free case review at 800-991-5292.

If you are injured in a hit from behind accident, you may be investigated by the insurance company as being partially at-fault for the crash even if that was not the case. When this happens, an experienced car accident lawyer can help you get the compensation you deserve.

David Azizi has practiced personal injury law for over 23 years and has an outstanding success rate of 98 percent.

Call David as soon as possible after the accident before evidence disappears and witnesses’ memory fades. Let him take the burden of fighting for your rights and give you the ability to concentrate on yourself. Reach out at 800-991-5292 for a no-obligation case review.

If you wish, check out David’s whiplash calculator.

You can enter your data online, and review the answers at the free consult.

Ever wonder why rear-end accidents are so common in California? Part of the problem is the massive traffic people must navigate every day. The number of vehicles registered in California in 2017 exceeded 35 million. Since most people must use their vehicle to get to work or the store and travel over highways to do it, it is not hard to imagine that accidents happen. Factor in the traffic jams and slow progression that people face, and the overall incidence of rear-end accidents rings true.

Common Causes of Hit from Behind Accidents

Injuries in a Rear-End Accident

The nature and severity of an injury in a rear-end accident has a lot to do with the pain and suffering compensation a victim will receive. One of the most common injuries is whiplash. This occurs when the muscles, tendons, ligaments and soft discs between the vertebrae in the neck (cervical area) are damaged.

It can range from a limited situation to one where the pain exists chronically. Although about 50 percent of all whiplash symptoms persist longer than a few months, not all whiplash accidents are symptomatic right after the accident. Instead, they may appear several days later.

This delay may make the accident victim decide not to seek medical care after the accident.

Chronic whiplash-induced pain can occur for several reasons. One factor in chronic pain is whether the discs in the neck are damaged, or the person had a preexisting condition such as osteoarthritis that was aggravated by the injury.

When this exists, the whiplash injury becomes a component of chronic, unrelenting pain.

Other Consequences of Whiplash

Value of a Car Accident When Hit Behind Settlement

Likewise, a significant injury to the person’s back or neck requiring surgical intervention such as vertebral fusion will usually be compensated more than a less serious, soft-tissue injury. Estimates of recovery time or if the injury is considered permanent all factor in.

Damages After an Accident

After an accident, there are two main forms of damages. They are:

Economic damages: These are easily calculated and represent the financial cost of the accident such as medical treatment and lost wages.

Noneconomic damages: These are more subjective and represent the emotional, psychological and physical pain the person experiences after the accident. This is also called pain and suffering.

Pain and suffering is a phrase that encompasses all the pain the victim suffers due to his or her injuries both acutely and chronically. It also includes the pain due to the medical treatment when the injury happens and necessary treatment in the future. In addition to pain, an individual experiences emotional distress because of the pain and the injury itself.

Factor in the worry, depression and anxiety the person feels, and you have an idea what pain and suffering are.

There are factors that must be considered when calculating pain and suffering and include:

Who Is Liable in a Hit From Behind Accident?

In most cases, the driver in the rear who hits a lead vehicle is at fault. In some cases, there are circumstances that might mitigate this, and both drivers may share a portion of the responsibility if their actions can be seen, at least in part, as the proximate cause of the accident. Juries can assign the degree of negligence to each party in an accident. The driver in the rear is usually considered to be at fault, at least to some extent.

Since California is a comparative negligence state, more than one party can share in responsibility for the accident. If jurors assign fault to more than one driver, they are further asked to say what percentage of fault the drivers share. For example, in a rear end accident, say that the lead vehicle did not have working brake lights and slowed down due to an accident ahead. The rear driver would not know that the lead vehicle was reducing their speed.

This could result in the driver to the rear maintaining their speed and hitting the lead vehicle. In this instance, both drivers would be partially at fault. Under the doctrine of comparative negligence, a driver is liable for the percentage of damage he or she caused. If both drivers bear some responsibility, they would be able to collect only for the damage they did not cause.

The defense might claim that the lead vehicle braked because there was the sudden emergence of an object in the road. The plaintiff would rightly say that the lack of brake lights left the driver unaware that the lead vehicle was stopping, and that the driver was negligent. Even if the driver to the rear could prove that, both drivers would most likely share some fault. The jury would be able to assign the percentage of fault.

In a similar case, the rear driver theoretically may be assigned 60 percent of the fault, while the lead driver would bear 40 percent of the responsibility. This means if someone was injured in the lead vehicle and asked for $100,000 in damages, the most they could receive is 60 percent of that or $60,000.

Negligence When One Car Is Pushed Into Another

On occasion, a middle vehicle is hit by a vehicle behind it, pushing it into the car ahead of it. In this case, the middle and lead vehicles would have a liability challenge against the driver of the third vehicle. Alternately, a lead vehicle that suddenly stops or slows down considerably, causing the car behind it to slam into it, could have a measure of liability, particularly if its brake lights were not in working order.

In this case, the driver of the rear vehicle may be able to suggest that the accident would not have happened if the lead vehicle did not stop. This latter defense may flounder, however, since the driver in the rear should be able to stop if they maintained the proper awareness, distance and speed.

A Preponderance of the Evidence

In a situation where a lead vehicle appears to have negligently set the stage for a rear end crash, evidence must be provided that substantiates this claim. In addition, the defense’s evidence must outweigh that of the plaintiff. In civil trials, this means that they must provide at least 51 percent more evidence than the plaintiff.

If you are in a rear-end accident, you need the services of a seasoned law firm. David Azizi has been handling such cases for 23 years. He leaves no stone unturned to find out why the accident occurred. David also reviews medical records, interviews medical providers and uses experts to determine the degree to which the victim might recover.

Once he has structured a strong case, he uses his skill to negotiate a settlement with the insurer. If the insurance firm is unwilling to pay what the accident is worth, David has no qualms about taking the case to court.